As is often the case, I chose to take my trip to Tanzania in November. At the very end of the dry season, foliage is sparse, visibility is as good as it gets, and roads are dry and easy to navigate. Better still, perhaps because the short rains may arrive at any moment, there are generally not many other travelers to compete with. If and when these rains do come, it is in the shape of afternoon thunderstorms that have very little impact on daily activity, other than to brighten up the skies and clear out the air leaving the smell of fresh earth hanging above the ground. (By the way, did you know that there is a word “Petrichor” for this wonderful smell, and a reason for this particular scent?) I also love to watch how quickly the earth responds to moisture, and a green sheen appears across the land. I am a hopeless but relentless photographer, so I need all the help I can get. The mostly tan, brown and grey animals invariably display better against shades of green, than other shades of tan, brown and grey dirt!

To begin with, I undoubtedly recommend a two-night stay in Arusha if at all possible. Not only for collapsing and recovering after long flights and avoiding a jet-lagged start to a safari, but also to take in a glimpse of daily life in 21st century Tanzania, as well as the vast art collection in the gallery at the Arusha Cultural Heritage Center. Personally, I needed time to visit the offices of our colleagues in Arusha and took a tour of their premises, (The workshop where the huge fleet of safari vehicles is kept in ship shape, was most impressive). The discovery of the day though, was the African Tulip Hotel: so much more personable and intimate than other options in the same price range, and many of my clients have been reaping the benefits of that visit ever since.

My safari took me westward from Arusha to the Serengeti, beginning with the beautiful new stretch of paved road, and a scenic drive along the Selali swamp through the Tarangire National Park. True to form, it was teeming with elephants, antelopes, birds, and one “calendar- worthy” shot after another. My first major highlight however, was seeing an exciting new development just beyond the park. The corridor along which animals used to move freely from the Tarangire River to the shores of Lake Manyara has long been dismantled by human settlement and activity, but two brave souls are working on creating a passage for them once again. Fabia Bausch and Nicolas Negre aim to restore this ancient migratory route by reclaiming the land (even if it means paying annually for hunting permits that they never plan on using), and by operating what they term “slow safaris” from their beautiful Chem Chem Lodge and Little Chem Chem Camp. The focus is not so much on big game here, but the refreshing variety of walks, spa treatments, sundowners on the shores of the lake and most of all the superb hosting, while throughout both properties, Nicolas’ photographs and creative touches combine beautifully with Fabia’s style and practical approach.

In spite of the sometimes arduous journey from the rim of the Crater to the floor, no safari in northern Tanzania feels complete without a drive through the Ngorongoro crater. Barely 100 square miles, (roughly the size of Nantucket) it doesn’t require multiple days to explore, but it still feels a little like stepping through the looking glass into a snow globe with zebras, giraffes, wildebeest, lions, warthogs, buffalo, the odd rhino, a few hippo and even flamingoes on the Magadi lake. Understandably, the crater becomes quite a bottle neck in high seasons, but because of the confined space, and rather easily spotted wildlife, many travelers are lulled into sleeping in and setting off after breakfast only. To avoid becoming trapped in a convoy of minivans inching down the inner wall of the caldera, or the crush of land cruisers around the scenic Ngoitokitok Spring by lunchtime, we chose to set off at daybreak anyway, and almost like making first tracks on ski slopes, enjoyed uninterrupted views and undisturbed game viewing before returning to our lodge for a proper lunch, a nap and an invigorating hike through the forested slopes of the Ngorongoro Conservation Area – a strategy that paid off well, and which I would recommend to anyone. 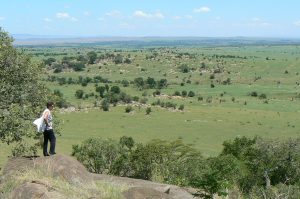 The drive to Serengeti can be brutally bumpy, and what many consider a “highlight” along the way, the Olduvai Gorge, is probably mostly of interest to fervent archeologists and paleontologists. That said, I think the drive along the gorge itself to the fabled Shifting Sands is a worthwhile diversion. We’ve written about these before, but for the most part, our guests prefer to fly to whichever part of the Serengeti they visit next. Over the course of the week we explored all of the major areas inside the 5,700 mi² Serengeti National Park (yes – slightly larger than the state of Connecticut). From the grass plains of the Ndutu area in the south, to the Moru Kopjes, through central plains, and from the western corridor and the Grumeti reserves in the west, to the Loliondo Game Controlled Area in the northeast, circling back to my favourite part – the Lamai triangle.

We all know that Serengeti means “endless plains” so I love perching on top of a Kopje for a breathtaking wide angle view of the infinite grasslands below. This is only a part of what made Lamai Camp another high point of this trip.  The view from every glassless window, from the lip of the infinity pool and the many boulders around the camp was soothing, invigorating and mesmerizing, all at the same time. The general lay-out, the “shabby-chic-done-right” interior design, a few funky details and the brilliant hosting in a relaxed atmosphere all aligned to put this camp right back on my list of places to return to.

To my great surprise, we encountered a very late-season crossing of wildebeest at the Mara River, but this part of the Serengeti delivered the most spellbinding experience: a couple of hours spent watching four young cubs cavorting under the watchful eye of a patient lioness, who would tolerate their roughhousing, snarl when they crossed the line and roll over to feed them at regular intervals.

As always, my guide was the most memorable element of my experience, and the most valuable player in the game.   Not only did he keep us informed and alert, he took a keen interest in my side of the business, put up with my endless questions and often joined me to look around new properties. He generously shared his views and experiences of lodges and camps, mulled over possible itineraries along the way and deliberated with me on the pros and cons of various logistical options. In all he left me with new appreciations and insights, many fond memories and most of all a new phrase in my limited Swahili repertoire. To counter my favourite expression,”moja kwa moja”, (“one by one, non-stop and straight ahead”) he insisted that I learn to “ngoja kidogo” – to wait a little bit now and then.  I’m glad he did… and I’ll thank him next time.