Vast areas of unspoiled and virtually unexplored protected wilderness, make Zambia an undisputed favorite among dedicated safari enthusiasts. Taking its name from the mighty Zambezi River, which flows along its southern border, Zambia has set aside a large percentage of its land as wildlife reserves. This well-watered region of Africa has large tracts of open woodland and floodplains rich in wildlife. Small, well run lodges and camps offer friendly, personal service in pristine wilderness areas known both for their concentration and diversity of game and birdlife. Within Zambia’s borders are several national parks each with its own character and particular blend of predominant animals and birds. South Luangwa and Kafue National Parks are ideal wilderness areas. Here you can enjoy traditional walking safaris, mobile tented camps, remote bush camps, night drives, game fishing, and water borne activities. Zambia is well known for its top-quality bush guides. Zambia shares the mighty Victoria Falls with Zimbabwe, and is one of its most popular destinations. The warmth and welcome of the Zambian people is legendary.

SOUTH LUANGWA VALLEY
Situated in a remote region, Zambia’s South Luangwa Valley is home to over 60 different animal species and over 400 different bird species. Experts have dubbed South Luangwa as one of the greatest wildlife sanctuaries in the world, and not without reason. The concentration of game around the Luangwa River and its ox bow lagoons is among the most intense in Africa. As one of Africa’s most unspoiled parks, South Luangwa National Park features a great diversity of habitat, scenery and wildlife. The Luangwa River and its lagoons form the park’s eastern boundary and play a major role in the ecology of the region. The changing seasons add to the Park’s richness ranging from dry, bare bushveld in the winter to a lush green wonderland in the summer months. The visitor can expect a wildlife experience that is difficult to duplicate elsewhere in the world. The valley has been called the “Last Kingdom of Elephants” and today it has a population estimated at 15,000, along with equal number of hippo in the Luangwa River. Luangwa allows night game viewing with spot lights to glimpse the fascinating nocturnal creatures not visible or active during the day. Lions on the hunt, hyenas, civets, honey badgers and porcupines are often seen at night. Most notable, however, are the leopards which are frequently observed stalking and hunting their prey, or interacting with marauding lions or hyenas intent on robbing their kills. Walking safaris, under the guide of experienced safari rangers, can last from a few hours to much longer, mobile camping safaris, where you explore this wilderness by walking from bush camp to bush camp.

LOWER ZAMBEZI NATIONAL PARK
The Lower Zambezi National Park, the most recent of Zambia’s National Parks, was for many years a forgotten wilderness. But now the 2500 square miles of superb game country welcomes visitors from around the world. It lies along the northern bank of the Zambezi River, downstream from Victoria Falls. The sparkling waters of the Zambezi are a focal point for the abundant wildlife, which includes elephant, hippo, buffalo, zebra, lion, cheetah, leopard, various antelope species, baboon and vervet monkey, together with a great variety of birds. There is an escarpment along the northern end, which acts as a physical barrier to most of the park’s animal species. The river’s edge is overhung with a thick riverine fringe, mostly diasporus, ficus and other riverine species. Further inland is a floodplain surrounded by mopane forest and interspersed with winterthorn trees and Acacia albida. The hills, which form the backdrop to the park, are covered in broadleaf woodland. Canoe safaris have become a popular way of exploring the Lower Zambezi, enabling visitors to get close to the wildlife in its natural habitat, although a lookout needs to be kept for the large crocodiles which live in its waters. Fishing is also good along the river, and most lodges offer fishing with rods and simple tackle is provided. Healthy tiger fish and bream catches are common as well as vundu, a member of the catfish family, weighing up to 25 pounds.

LUSAKA
Lusaka is the fastest growing city in Central Africa. Its pleasant climate and central location make it an excellent stepping stone for discovering the whole of Zambia. The tourist passing through the capital may not see any reason to stay, but Lusaka is the product of a country battling to find its way in a new world, caught between colonial beginnings, years of socialist independence and new democracy. It typifies the problems many African countries face as they find their “independent” footing in a world that’s surging ahead. So it is worth spending some time exploring this lively city. A tour of Lusaka usually includes the bustling Luburma Market, the Anglican Cathedral of the Holy Cross, the Freedom Statue, the Munda Wanga botanical gardens and the adjoining zoo.

KAFUE NATIONAL PARK
Kafue is Zambia’s oldest park and by far the largest. It was proclaimed in 1950 and is spread over 13,400 square miles – the second largest national park in the world and about the size of Wales. Despite the depravations of poaching and lack of management, the park is still a raw and diverse slice of African wilderness with excellent game viewing, birdwatching and fishing opportunities. Much of the park consists of woodland, which opens out at intervals into wide, grassy areas known as “dambos”, grazed by sable, hartebeest, wildebeest, buffalo and zebra. From the astounding Busanga Plains in the northwestern section of the Park to the tree-choked wilderness and the lush dambos of the south, fed by the emerald green Lunga, Lufupa and Kafue Rivers, the park sustains huge herds of a great diversity of wildlife. Wildlife includes thousands of red lechwe on the plains, the ubiquitous puku, the stately sable and roan antelopes in the woodland and the diminutive oribi and duiker. Large prides of lion, solitary leopards and cheetahs are the prime predators. There is a host of smaller carnivores from the side-striped jackal, civet, genet and various mongoose. Birdwatching, especially on the rivers and the dambos, is superb. Notables include the wattled crane, purple crested loerie and Pel’s fishing owl. Over 400 species of birds have been recorded throughout the park. The Kafue and Lunga Rivers offer superb fishing opportunities, especially good bream, barbel and fresh water pike. Most lodges have fishing tackle, rods, boats and bait available. 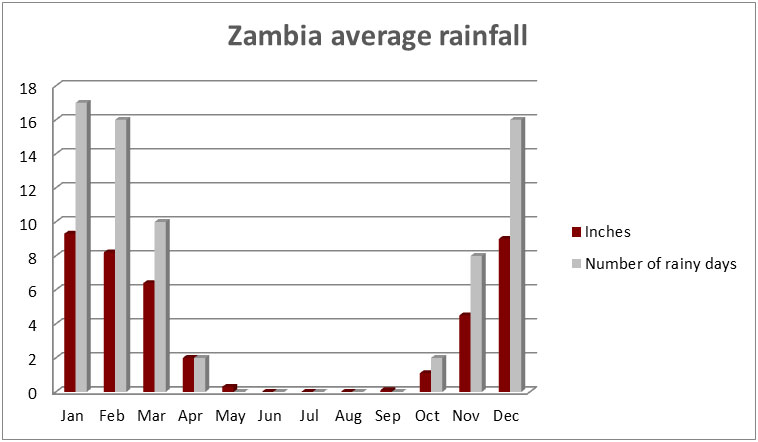 This bush adventure harkens back to yesteryear, offering a traditional safari featuring an outstanding wildlife experience in simple, comfortable accommodations. You'll be met at Lusaka airport and transfer by air to Kafue National Park, the country's oldest national park. This area is home to an abundant variety of wildlife, including lion and leopard. Musekese Camp is set close to the Kafue River. Activities are split between walking, boating and driving. Additionally, there is also a hide on the opposite bank of the river overlooking a flooded dambo area which provides wonderful opportunities for those guests keen on photography. The adventure continues with a short flight down to the Lower Zambezi for a further 4 nights at Kutali camp. The region is home to a diverse array of wildlife including elephant, hippos, crocodiles, zebra and antelope as well as a myriad of birdlife. Kutali is tucked away amongst the Winterthorn trees, there are 4 tents which have been designed to make the most of the Lower Zambezi environment – they are simple gauze tents with canvas drop down sides, which blend into nature. There is an en-suite bathroom with bucket showers and flushing loos. Enjoy bush walks and canoeing in addition to game drives on the banks of the mighty Zambezi river. Evenings are spent trading stories around the campfire.

This journey takes you through some of Southern Africa's most iconic wildlife regions, in South Africa and Zambia. Your adventure begins with 4 nights on safari where you can connect to one of South Africa’s most authentic and immersive safari experiences at Leopard Hills. Enjoy the reserve's incredible variety of game, including lion, leopard, giraffe, elephant and buffalo - as well as plains game and other predators, such as cheetah and wild dog. A short flight from the Kruger to Livingstone (Zambia side of the Falls) brings you to the majestic Victoria Falls, a UNESCO World Heritage Site of outstanding natural beauty. You'll stay at The River Club where you can enjoy views of the mighty Zambezi River from your River Suite. Enjoy a Tour of the Falls (Zambian side) and a sunset cruise during your stay. Additional activities available (at an additional cost) include Livingstone Island, Devil's Pool (water levels permitting), a helicopter flip over the Falls or a visit to Victoria Falls town on the Zimbabwe side of the Falls. Finally, you will journey by air for a further 4 nights at Anabezi Camp, in the Lower Zambezi National park with the Zambezi escarpment as its backdrop. In addition to game drives and bush walks, you'll also have the opportunity to enjoy canoeing and boating on the river or simply watch the river life unfold from camp.

This 11 day, 10 night itinerary in Zambia combines some of our favorite lodges in the Lower Zambezi, South Luangwa and Victoria Falls. Your safari begins in the Lower Zambezi National Park which features exceptional, undeveloped wildlife areas, renowned for its abundant game and variety of wildlife including hippos, buffalo, crocodiles, fish eagles and herds of elephants. Take advantage of the opportunity to participate in a walking safari. Walking was pioneered in Zambia and remains one of the few areas where this can be truly enjoyed. You continue your safari with a short flight to South Luangwa and a game drive transfer to the lovely Puku Ridge Camp. South Luangwa is abundant with elephants, giraffes, leopards, lions, wild dogs, buffalos, zebras and various antelope species – many of which will be easily spotted as you lounge on your balcony or eat dinner. Your safari is topped off with a visit to the majestic Victoria Falls (Livingstone) where you are treated to the impeccable service and style of Tongabezi Camp. One of the original natural wonders of the world, the World Heritage Site is known locally as ‘The Smoke that Thunders’. This spectacle is accessible from both Zambia and Zimbabwe and is an ideal place to combine game viewing and water sports.

This 9 night/10 day itinerary combines the Lower Zambezi with two camps in South Luangwa. The Lower Zambezi National Park landscape features rugged unspoiled wilderness of vast floodplains scattered with indigenous woodlands. You can look forward to an array of wonderful activities along the Zambezi including game drives, walking safaris, canoe trips and excellent tiger fishing. Bordering the Luangwa River, the northern and southern Luangwa National Parks contain some of the most breathtaking and untouched wilderness in Africa. You will have the opportunity to explore this area in depth by visiting two unique camps, one with a focus on walking and the other on prolific game drives.

A land of staggering beauty, Botswana has developed a tradition of top-level safari tourism, offering some of the best wildlife safaris you will find. Natural parks and vast private game reserves make up 40% of a fenceless territory, enabling huge herds of game to roam freely in contrasting landscapes of magnificent extremes, from the Kalahari’s desert plains to the Okavango’s lush waterways… Combine this with the natural wonder of the breath-taking Victoria Falls and with such a diversity of habitats and ecosystems there is a safari for every season. Your safari concludes in Zimbabwe, a country of untamed beauty, thriving wildlife and welcoming people. Enjoy three nights of superb game viewing and unsurpassed hospitality at Somalisa Camp in Hwange National Park.