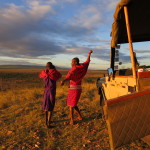 Going on safari is not just about marveling at Africa’s rich wildlife, and jaw-dripping landscapes. It’s about meeting local people and enjoying the cross-cultural interaction. Visiting a local Maasai village, or going on a traditional hunt with a Kalahari Bushman has been as memorable for our clients as their first sighting of a lion, or leopard.
Whether you are in Cape Town practicing the Xhosa clicks with your guide, or in the Okavango Delta learning how to say “hello” in Setswana from your tracker — connecting with people on your travels is extremely enriching. Finding a common bond and sharing a joke with people from vastly different backgrounds simply reinforces the fact that we humans are more similar than different. As Mark Twain aptly put it – “Travel is fatal to prejudice, bigotry, and narrow-mindedness, and many of our people need it sorely on these accounts.”
Here is a brief overview of the traditional communities that you may have the opportunity to visit while on safari in East Africa  Ask us about the best ways to catch a glimpse into their lives.

The Maasai (Kenya and Tanzania) 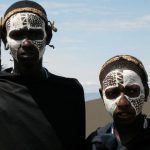 The Maasai live in the semi-arid Rift Valley region of Kenya and Tanzania. They own large herds of cattle, sheep and goats which they follow around seasonally in search of new grazing grounds and water sources. Traditionally the Maasai have always been a proud and independent tribe. They did not cultivate the land or depend on a cash economy as many of those around them did, rather they lived off the blood, milk and meat that their cattle provided them. Cattle plays a central role in the life of the Maasai. Cattle represents food and power; the more cattle a Maasai has, the richer he is and therefore the more power and influence he will have within his tribe.  These days the Maasai have a more mixed diet as they have been forced to settle into ever decreasing areas of land and adapt to a more sedentary lifestyle which in some cases includes growing or buying cultivated food. Traditionally the Maasai have always looked down upon those who tilled the land since this rendered it useless for grazing. While the Maasai lifestyle has undergone some changes in the past three decades in particular, their strong social traditions remain intact.
We find that camps and lodges run by the Maasai community offer the best bases for cultural exchange, as do multi-day walking safaris with Maasai guides. And some specific lodges have a special relationship with a particular community which will allow a more authentic experience as well. When you drive from Arusha to the Ngorongoro Crater, there are many Maasai markets along the road, where you can stop and walk around without being pushed into a sale. These are markets run by local people, for local people — not the tourist trinket markets. Some of our favorite accommodations where you can have a reasonably authentic Maasai experience are Campi Ya Kanzi in Kenya, Entamanu Ngorongoro , Highlands Camp (Ngorongoro Crater area), andBeyond Klein’s Camp and Saruni Mara (especially for access to local market on Thursday’s). 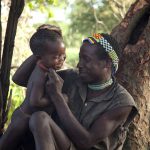 The Hadza (or Hadzabe) live in the Lake Eyasi region, northern Tanzania (about a 5 hour drive from Arusha). The Hadza are a small community of hunter-gatherers and speak a “click” language. There are only a few hundred Hadza people left who follow a traditional lifestyle. The Hadza are not closely genetically related to any other people.  The descendants of Tanzania’s aboriginal hunter-gatherer population, they have probably occupied their current territory for several thousand years, with relatively little modification to their basic way of life until the past hundred years. The Hadza community are nomadic and move as the seasons and food availability dictates.
If you stay at Kisima Ngeda Tented Camp, you can enjoy a half day or full day with a local Hadza community. You can follow a hunt if you are lucky, look for wild honey, collect fruits and tubers and then share a meal at the end of the day. Tours start very early in the morning, so you want to factor in at least two nights at the lodge to make the experience worthwhile. It is easily combined with the Serengeti and the Ngorongoro Crater. The local Datoga tribe also lives in the region, they are similar to the Maasai. 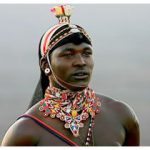 The Samburu live just north of the equator in the Rift Valley province of Northern Kenya. The Samburu are closely related to the Maasai of East Africa. They speak a similar language, derived from Maa, which is called Samburu. The Samburu are semi-nomadic pastoralists. Cattle, as well as sheep, goats and camels, are of utmost importance to the Samburu culture and way of life. The Samburu are extremely dependent on their animals for survival. Their diet consists mostly of milk and sometimes blood from their cows. The blood is collected by making a tiny nick in the jugular of the cow, and draining the blood into a cup. The wound is then quickly sealed with hot ash. Meat is only consumed on special occasions. The Samburu diet is also supplemented with roots, vegetables and tubers dug up and made into a soup.
The Samburu live in a very beautiful, sparsely populated part of Kenya with abundant wildlife. Much of the land is now protected and community development initiatives have extended to eco-friendly lodges jointly run by the Samburu. As a visitor, the best way to get to know the Samburu is to stay at a community run lodge, or enjoy a walking or camel safari with Samburu guides. While many safaris offer the option of visiting a Samburu village, the experience is often less than authentic. We recommend staying at either Saruni Samburu or Sasaab to enjoy this area and its unique culture to the fullest. 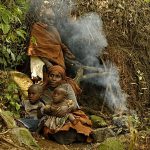 The Batwa are hunter-gatherers living on the periphery of Bwindi Impenetrable Forest (one of the last refuges of the mountain gorilla). As has been the case with many traditional forest hunter-gatherers in this region, many communities have been forced to live outside the forest areas, and encouraged to plant crops and send their children to school. But a few of the elders remain committed to their traditional lifestyle.
If you are tracking gorillas or chimpanzees in this area, allow a day to meet the Batwa as well. It’s an important way to allow the Batwa to maintain some of their traditions and know they have value outside of their communities as well. You will have an unforgettable experience as you learn how to hunt, make fires, build houses, use plants for medicinal purposes and even how the Batwa bury their dead. After the tour you are welcome to taste their traditional meal of goat stew, pap (ground milieu meal) and boiled green bananas with salt. After dinner simply relax and sip a drink as you listen to folk tunes played on the traditional Bakiga guitar. Some of our favorite accommodations to take advantage of this rare opportunity include Gorilla Forest Camp , Mount Gahinga Lodge and Volcanoes Bwindi Lodge.