How We Beat the Crowds in Kenya's Masai Mara

Anouk is traveling in Kenya right now, and while November is not traditionally the busy season, we still recommend staying in the less-crowded conservancies to really make the most of any visit to the Masai Mara. She’ll be enjoying 4 nights at Saruni Mara and Saruni Wild in the Mara North Conservancy.
The Masai Mara is a truly spectacular safari destination especially during the annual migration of wildebeest and zebra, when millions of animals follow the unbroken cycle of survival as they move between Tanzania and Kenya in search of fresh grasses. The sight of more than a million of these creatures moving as a great mass across the savannah is one of the most enthralling safari experiences a person can ever hope to witness.
But even if you visit beyond the magical months of August through September, you are certain to see large resident herds of zebra and wildebeest along with lion, cheetah, hippo, elephant, leopard, buffalo, warthog and giraffe. Couple the incredible wildlife of this area, with a beautiful and varied landscape of rivers, rolling hills and woodlands — and you can see why the Masai Mara is the most popular national park in Africa. Unfortunately this also makes it one of the busiest wildlife destinations on the continent. And almost nothing is worse in our opinion, than a spectacular sighting of a cheetah and her cubs, surrounded by a dozen minibuses.
How to Avoid the Safari Minibuses 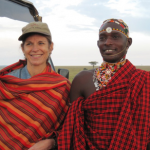 So how do we get our clients to enjoy the Mara, without the crowds of tourists? The answer is quite simple really, we suggest staying in camps that have made their home just outside the official borders of the National Reserve, in the “Conservancies”. Conservancies in Kenya (and in Tanzania) are large tracts of land, often adjoining National Parks, that eco-tourist operators rent from local communities or private ranches. The agreement is based on the understanding that the rented land is not used for grazing cattle or farming, but left alone for the exclusive use of wildlife, and a small tourist population armed with cameras. It’s been a win-win situation for both wildlife, tourists, and traditional cultures like the Maasai and Samburu who live in these areas.
It’s a Win-Win!
By booking a safari in a conservancy, we not only help support the local community and wildlife conservation efforts, but also guarantee our clients a unique safari experience. The Maasai around the Mara have found many more employment opportunities at the camps. Their children can afford to attend schools, and new schools and clinics have sprouted up as the leases paid have provided a regular income to many individual families.
And How is the Safari Experience Better in a Conservancy?
Animals are notorious for ignoring “official borders” especially when there are no fences involved. The minute the Conservancy concept took root (in the early 1990’s in the Mara), the wildlife embraced the new grazing areas with enthusiasm, and never looked back. These days the sightings in the Conservancies are actually better than in the official Mara Reserve. An unofficial poll taken in our office confirmed this! 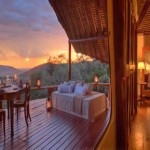 The camps that operate in the Mara Conservancies also restrict the number of clients (and therefore crowds) to a very neat and basic sum of: One tourist tent for every 700 acres of conservancy land. So you get to enjoy the abundance of wildlife without seeing other tourists. The Conservancies are also more remote, so clients tend to fly-in which also naturally restricts the number of people coming in and enjoying game drives (no self-drive or day-trippers).
As the land is privately leased from the Maasai, the rules that bind visitors to their 4×4’s in National Parks, are not enforced in the Conservancies. This allows for those wonderful sundowners, overlooking the beautiful Mara Plains, as well as thrilling bushwalks with armed Maasai warriors to protect you. You can also enjoy night drives which are very exciting and offer much better chances of spotting the elusive leopard!
What Camps Do We Recommend?
Because the official Masai Mara Reserve has become somewhat crowded we have in the past few years really drifted towards favoring camps located in the conservancies that make up the larger Mara Eco-System. Clients still get to spend a full day or two (depending on the length of their itinerary) in the Mara Reserve with a picnic lunch, but the rest of the game drives take place in the more exclusive conservancies. We highly recommend Elephant Pepper Camp, Saruni Mara, Cottar’s 1920’s Camp, and Bateleur Camps. These camps all offer extraordinary levels of comfort without compromising the true safari experience.
If you would like to book your next Kenya safari and stay in a Conservancy in the Mara Eco-System, don’t hesitate to contact us.