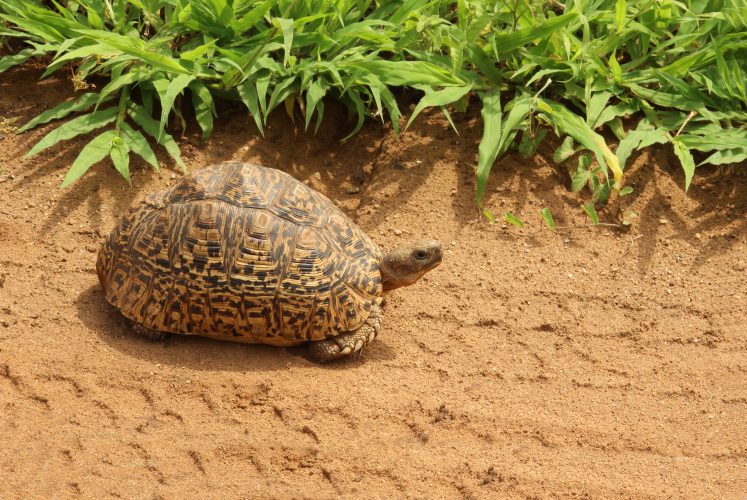 If you would like to show off on your next (or first) Safari, know the names of the “Little Five”, or see if you can spot them for real bragging rights. They are the Buffalo Weaver, Elephant Shrew, Leopard Tortoise, Ant Lion and the Rhino Beetle. Rather an odd assortment of animals, wouldn’t you say? So what do they have in common, and what makes them the “Little Five”? It’s all semantics really. Unlike the Big Five (so called not because of their size or rarity, but for being considered the most dangerous by the big game hunters, and therefore sadly, the most coveted trophies), the Little Five are simply a group of “other animals” that contain the names of the Big Five in their own:  Buffalo Weaver, Elephant Shrew, Leopard Tortoise, Ant Lion and Rhino Beetle

Buffalo Weavers are are gregarious, highly social birds, but the least accomplished nest makers. Look for their large messy communal nests with side entrances facing different directions high in a tree – typically in a fork of branches. It is a large, rather untidy structure of twigs and coarse grasses. They are often found alongside buffaloes, feeding on the insects they stir up, hence the name. 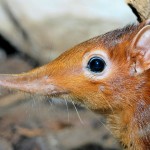 Elephant Shrews are so named for their particularly elongated snouts. (Another way to distinguish shrews from mice, by the way, is by looking at their front feet: shrews have 5 clawed toes on each, and mice have only 4. Yes – it’s that easy!) However, the Elephant Shrew is not even a shrew at all, but rather a sengi –  not closely related to any other group of living mammals. Many biologists currently include the elephant shrews in a new superorder, the Afrotheria, which encompasses several other distinctive African orders such as elephants, sea cows, and hyraxes and aardvark.

Leopard Tortoises are the fourth largest species of tortoise in the world, growing up to 2 feet long, and with typical adults weighing 40 – 50 pounds. Their name is derived from the black and yellow spots on their shells.  In defense, they retract their feet and head into their shells. This often results in a hissing sound, probably due to the squeezing of air from the lungs as the limbs and head are retracted

Ant Lions (also known as “Doodlebugs”) resemble dragonflies, but are more fragile and very weak fliers. The larva dig pits in dry soil which is easy to shift. Starting with a circle on the ground, digging deeper and deeper, it spirals in toward the center. The dirt that is dug out is thrown out energetically with the head, creating a tiny funnel-shaped crater. They then prepare the sides of their pits with fine sand or soil particles, and bury themselves at the bottom so that only the head, with opened jaws, can be seen, and wait for their prey. Ants that fall into the funnel can’t climb out, and land in the jaws of the “lion”.

Rhino Beetles are among the largest on earth. They get their name from the huge spikes on their heads, used by males in combat rather than for defense against predators. Measured by proportional strength, they are the strongest animals on the planet, because they can lift up to 1,000 times their own weight. Yes, an elephant can carry a lot more weight than a Rhino Beetle, but only up about to 25% of its own.