There's a Cheetah In My Car!

In response to the many questions and concerns that this picture has raised, Yvette would like to set the record straight … 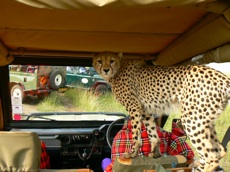 Was I Afraid?
No – I was not afraid. At the time I was just concerned that she would lose her footing and get hurt or stuck, and then panic. She came from the right hand side, and stood upright behind the guide. He just sat very still while she sniffed about his collar and head. I don’t know what would have happened if there were (excitable) kids in the car. But I doubt she would have leaped into our vehicle if it wasn’t practically empty. There was only me standing at the back, and David in the driver’s seat. Not for a moment did either of us feel in any personal danger. She was clearly just inquisitive. Staying calm and letting her explore the vehicle seemed natural. 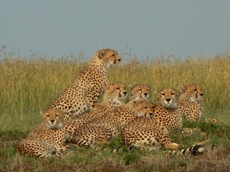 The Scene
We had been watching this amazing female cheetah who has managed, against all odds, to raise a litter of no less than 6 cubs to about 10/11 months old. I think raising that many cubs successfully must be a record. One of the other guides told me that she had been known to actually hide her cubs under one of the game vehicles on occasion while they were little. So they’re entirely relaxed about the cars around them, and like many other cheetahs, will at times jump up onto the bonnet or roof for the sake of a better vantage point.

So we were watching the family of seven lazing about from one old grassy knoll to another. When the mother started to move further away, some of the cubs came fooling about around and under our vehicle instead of following her. I was standing at the back of the vehicle (open top) trying to get pictures of them, when this cub jumped. 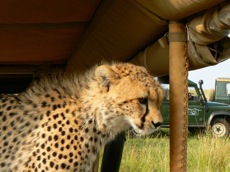 The Leap
The cub jumped right into the vehicle through the space between David (the driver/guide) and I. She sniffed about David and peered out through the front window, as if to establish what it was that fascinated us tourists so much. She then turned around to look me in the eye. By this time we were surrounded by other vehicles, and she stood there for a moment staring at them from inside ours. Then she started tugging at a seat belt as if she wanted something to play with. When she realized the seatbelt wouldn’t come off, she finally jumped out and ran off with the rest of the gang.

Will it Happen to You?
I really, really hope that she doesn’t make a habit of it, or that others don’t try to “entice” her and encourage that kind of behavior. Because it can only have a negative outcome as far as I can think it through. The cheetah could easily panic and so could the tourists. I know it sounds arrogant to wish that David and I will be the only ones who ever get to experience such a thrill, but I guess that is exactly what I’m hoping for.

Would you like to encounter a cheetah this close, or would you rather not?!